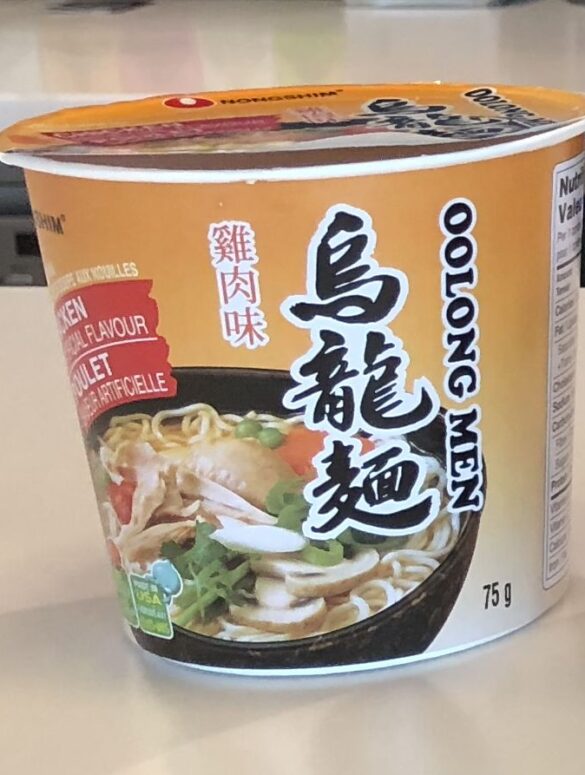 But hear me out before you instantly say HELL NAW.

We’ve tried it ourselves. We even got several Vancouver Instagram foodies to be part of our taste test.

Guess what they said about this odd instant noodle hack…

I would actually do this.

This is surprisingly good. Why does this work?

With that reassurance, read the next sentence slowly — and then again twice.

Instant noodles cooked in tea, instead of water.

Now let’s get deeper in this.

This instant noodle hack was first brought to my attention from a friend, after I told him about the premise of our food taste testing show, Foodies Try. As I was telling him all the ideas that my team has come up with, his eyes lit up.

“Jason – I read something a while ago that would be so good for your show”, he said with a huge grin.

“You basically cook your noodles in Earl Grey tea or whatever tea, instead of water. Isn’t that crazy? I don’t remember where I saw this but you should do it.”

As odd as it sounded, it was perfect for the show. And while preparing for filming, I found that the hack was previously reported by FoodBeast before in 2017. The hack itself never seemed to have taken off.

But the oddity of it and the mystery of combining two very common ingredients together was alluring.

For the taste test, we tried 4 different versions of the hack using a common and cheap chicken flavoured cup noodle.

We also had the participants start off trying the cup noodle how it would normally be cooked (with boiling water and soup powder). It became the control item.

One thing to note is that in each version, we also put in the chicken soup powder into the tea. This did drastically transform some of the flavour profile and smells of the teas.

For instance, the smell of the Lemon Ginger Tea morphed into something that resembled a sugary cupcake or donut.

Or how for Stephanie, the Chatime Milk Tea version went totally left field and tasted like Japanese Tonkotsu.

What fascinated the participants and I about this hack is how fun it is to liven up a cup noodle by just putting in a tea bag, that is lying around the house. Although it isn’t that natural to do it, the ease of this hack makes it something worth trying again and again.

I guarantee you that you will be stunned (as in questioning your life) by the experience if you try this hack out. It is extra fun to try with a friend or a partner.

How To Do The Instant Noodle Cooked In Tea Hack

Everyone will enjoy one flavoured cup noodle with tea more than others. We recommend trying it with green tea first if you’re more risk aversive. If that isn’t a problem for you, earl grey tea and milk tea will be great choices.

If you do give this hack a try, let us know on Instagram @nomsmag.

10 Oldest Buildings in Vancouver That Stand the Test of Time