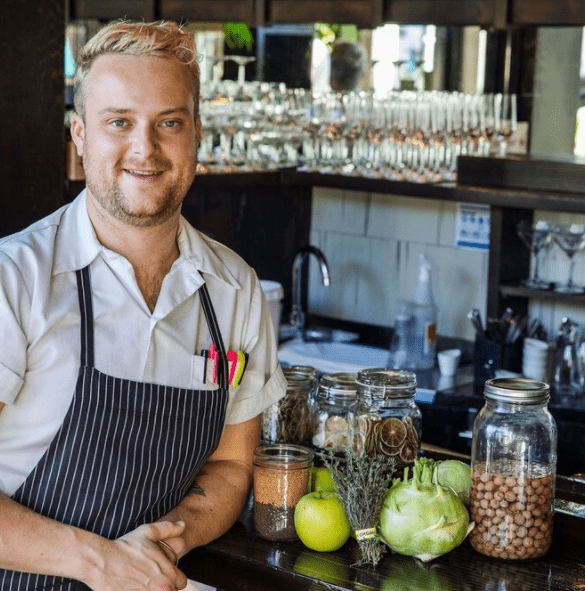 How I Cook is a Q&A series that peels back the curtains so you get a glimpse of the backgrounds and stories of some of the best chefs, pastry chefs, mixologists, and food specialists in Vancouver.

When it comes to counting the best vegan and vegetarian restaurants in Vancouver, Mount Pleasant’s The Acorn ALWAYS makes the list (for a very good reason).

The restaurant’s international acclaim, local awards, and focus on B.C. ingredients are partly the magical work of its talented Head Chef, Devon Latté.

We spoke with Chef Devon to hear about his culinary journey, the challenges and the rewards of the job, and his true feelings towards the Vancouver food scene.

How did you get into cooking?

[Devon] Growing up with parents who enjoyed food as much as I do now certainly helped!  Through my high school studies I always had a part-time job which was cooking brunch at a local bar and grill.  I fell in love with the kitchen atmosphere and camaraderie that came with it.

I went through the motions as a dishwasher, burger baller and egg poacher on the weekend brunches. Monotonous jobs at best, they still stole my heart away from university!

How did your career get you to where you are today?

[Devon] Starting and finishing as the youngest graduate at Le Cordon Bleu in my hometown of Ottawa, I immediately started a job under Chef Michael Blackie at the National Arts Centre. The kitchen was massive. Sections for banquets, catering to artists and orchestras and a prestigious restaurant was a lot to see for a young cook.

I then moved to Montreal and cooked at numerous restaurants before being recommended and named head chef at Notkin’s restaurant in 2014. I learned so much in my two and a half years there and made life-long friendships that I’ll forever cherish.

Making the move out to Vancouver was an easy one. The slower-paced industry and a new-found focus on work/life balance was an immediate draw and focus for my career, almost burning out at a young age of 26 after years in the food focused Montreal.

Finding the Acorn restaurant was a blessing for myself and my career. Vegetarian food was something I hadn’t experienced trying to cook or even considered but did it ever open my eyes and creative mind.  I haven’t looked back since and after four years I’m still learning, building and elevating here!

Where do you get your culinary inspiration from? (cultural heritage/family/mentor)

[Devon] My cooking style has a few major influences.  Number one would have to be my travels. Through South America, Europe and a few times through Southeast Asia, I’ve picked up many tricks and flavours that influence menus constantly.

Asking local farms to grow ingredients that aren’t ever heard of here is the most fun, along with educating guests and elevating their experience that way.

The other major influence would be manipulating vegetables in ways others don’t, most notably from chefs Athiraj and Joe Mercuri in Montreal. The radish being a prime example of this, crushing them creates a completely different flavour and texture than the traditionally used cutting or slicing techniques used in kitchens.

A lot of my cooking relies on the simple ingredient maple syrup, which you can find all over the Acorn menu, a direct influence from my time in Quebec and my original home of Ontario.

What would we find you doing when you’re not in the kitchen?

[Devon] If I’m not in the kitchen working, you’ll find me outdoors.  Foraging ingredients in PNW forests, on beaches or in local neighbourhoods is a big passion.  Playing hockey, tennis or ripping around on my bike or rollerblades. Softball summers with my closest friends or sipping wine on a patio!

What is your favourite part of your job?

[Devon] The creative release, constant problem solving and kitchen banter keep my job feeling like a passion or hobby rather than a regular old job. The networking and friendships made within the industry. I wouldn’t trade it for the world.

What is your favourite dish to make and why?

[Devon] I’ve taken a keen liking to our dish made of celeriac (celery root) the last couple of years.  It keeps re-appearing on our menu each winter.  Such an under used and appreciated vegetable, we prepare it in many ways.

Our favourite celeriac is from our favourite purveyor, Cropthorne Farm on Westham Island in Delta, BC.  We peel it, portion it and boil it out in aromatic, salty water.  This portion of the dish is then pan charred and hit with fermented cayennes and garlic from Klippers Organics Farm in Cawston, BC.  It then gets deglazed with a vinegar made from the celeriac skins and maple syrup.

The bottom of the dish is an emulsion of green curry, made mid-summer with all local herbs and ingredients.  A remoulade consisting of raw shaved celeriac dressed with a wild garlic mayonnaise centres the dish, then it’s topped off with a celeriac skin relish, “pearls” or “caviar” made of the celeriac skins and toasted hazelnuts from the Fraser Valley.  I love this dish.

We use the whole vegetable.  It’s very “root to stem” cooking, something we always try to accomplish.  We use the celeriac skins in so many ways, something most kitchens whip in the compost without a thought.  These can be a celery replacement in stocks too, when celery is out of season.  The peppers have been preserved and add much depth to the dish.  All-round it’s as tasty and technical as we want it!

How do you balance your work time and personal time?

[Devon] I think the biggest hurdle in getting to where I am today is just going through the motions of working for companies or businesses that had no intention of treating their staff properly.

I learned so much about what not to do from these folks, so maybe it was worth it in the end.  It’s made me very determined to continue the betterment and progression of the restaurant industry and the way we value the staff.  It’s of the utmost importance.

What was the biggest challenge you faced to get to where you are today?

[Devon] If I could give one piece of advice to my past self in the industry it would be to not take it too seriously, ignore reviews from unhappy-too much time on their hands- customers.

What is your under-the-radar food spot in Vancouver?

[Devon] HMMMMM. Under the radar food spots eh? I think Fassil Ethiopian food, a Chef Brian Luptak favourite, is top of that list. No cutlery and tasty food? Count me in.

Riddim and Spice on Commercial Drive (Jamaican, Jerk) has to be up there.

I’m always going to be a once-per week Pho guy. The #38 and #9 at Pho Tan Main Street is an absolutely bangin’ combo. Run, don’t walk.

The #24 at Hai Phong on Kingsway might be the best broth outside of Saigon.  RUN.

What do you love and hate about Vancouver’s food scene?

[Devon] I love how relaxed the food scene in Vancouver is and how tight-knit the community is.

I hate how early everything closes!

This is only a bite into the successes of Chef Devon.

But the next time you visit The Acorn you will know a little bit more about the man behind your plate and the effort served into the food in front of you.

This piece has been prepared with the help of Kameela Nash and The Acorn team. 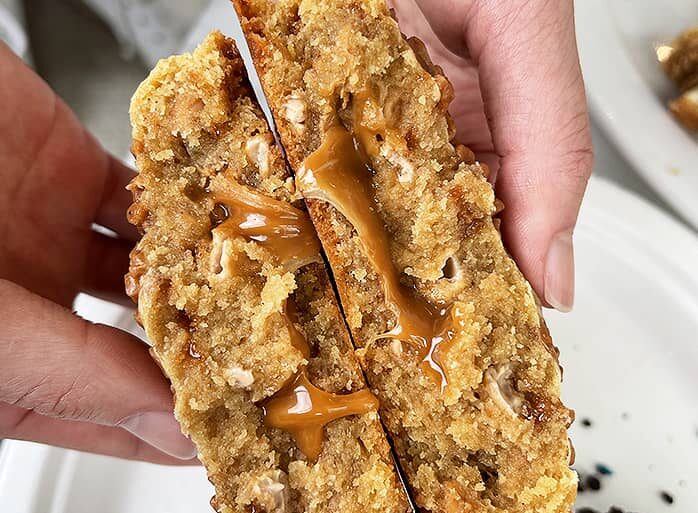 10 Best Vegan Restaurants In Vancouver For A Delicious Meal

10 Best Vietnamese Restaurants In Vancouver With A Cult-Following

10 Best Burnaby Trails For An Easy Day Out In Nature