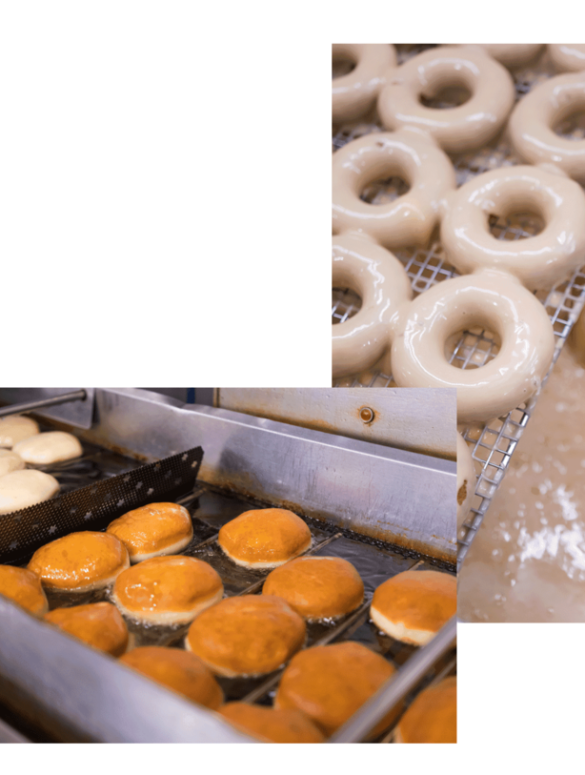 The Vivid Dream That Created A Donut Empire: Cartems Donuterie

People always tell you to “follow your dreams”, but that life advice has gone mostly over everyone’s heads. Not Jordan though. He did exactly that after having a memorable dream during his travels.

A successful donut shop that has got Vancouverites hooked. This is the story of Cartems Donuterie.

Can you tell me about Cartems?

[Jordan]: Cartems was started 2012. Our focus is on making really, really great donuts every day. We try to use local ingredients wherever we can. We choose to use organic ingredients wherever possible. We started in a small commissary kitchen with two people, and now we’ve got a staff of somewhere around 60 people. And three locations here in Vancouver.

How did you come up with the idea?

[Jordan]: When I was living in South Korea, I actually went to sleep and had a dream that I owned a donut shop. And it was like a really vivid, clear dream that I owned this donut shop, and we were serving fancy donuts, and everybody got a knife and a fork. And the name of the donut shop in the dream was Cartems, which is not a real word. But it was so vivid that when I woke up, I actually wrote it down on a piece of paper that I still have.

I woke up and I literally I shook my partner at the time, and I was like, “Andrea, Andrea, I just had this crazy dream that I owned this donut shop, and the donuts were super fancy.” So it was always this idea that stuck in my head, like on the back burner kind of a thing. And then when I was doing my masters at UBC, I’m not a huge fan of finance and accounting. I’m more into marketing and entrepreneurship. And at UBC it’s very collaborative, group projects and that kind of stuff during the program, and I just kept bringing up this donut idea. And that’s when I kind of realized that it was actually a pretty good idea, not just some random dream. I was looking around at Seattle and Portland, and these places already had amazing, fancy donut shops. There was a couple of them in Toronto, one in Calgary.

So I realized that, “Hey, you know what? I could actually do this. I could actually make this dream a reality.” The thing that kind of convinced me to do it was that in another magazine, a local magazine, they were interviewing a chef, and they were asking the chef what would you most like to see in the city of Vancouver. And I remember the chef said, “I want to see a fancy donut shop.” And I was like, “Oh my god. I should do it.” And that was it, totally.

Why did you choose this spot in Downtown Vancouver?

[Jordan]: So originally our first location was just a pop up, and it was actually at Carrol and Hastings. And it was just intended to be a temporary spot, but it was so busy we never had any time. Like if we had a day off, there was no … nobody wanted to go look for a proper location.

So we just had this little pop up. It was really, really small.

And eventually we got some more help during the day, which gave us a little bit of free time to go look around for a proper location.

And to be honest with you, we were just walking around this area seven years ago, and this space was empty. And all we saw was red bricks going all the way to the back, and it wasn’t even a kitchen. It was like a furniture shop or like, no it was fur coats, and we looked down and we’re like, “This could be a good spot for it.” We love the marquee sign out front. So that was it. We were just walking around. Obviously, we weren’t in a position to be opening up downtown ’cause we couldn’t afford the rent.

So we were trying to look for something kind of close to downtown but not downtown. And so this location really fit all the things we needed.

“Our whole intention here is we’re trying to uplift people’s days. That’s the whole goal, and the donut is kind of the conduit. It’s the thing that we make, and we do the best we can every day with it.”

Tell me about the donuts you make.

[Jordan]: So, first and foremost, we really do, we just try to use really, really great ingredients. As far as the recipes themselves, we have our special ratio of the ingredients, but there’s no special ingredient, per se. We just really choose to use the best quality ingredients we can.

Over the years, and I think particularly early on, we always tried to please everybody. We always tried to say yes to everyone, which is also kind of a lesson is that you want to try to say yes to as many people as possible but not spread yourself too thin. But in doing so, we really started to come up with different recipes for vegan donuts, for donuts made without gluten. So that opened up a lot of opportunities for us to serve different segments of Vancouver.

How that reflects now is we have vegan options. We have donuts that are made without gluten. Obviously, there’s gluten in the building, so it’s not completely gluten free, but certainly gluten friendly. We bake some of our donuts.

We really try to use fresh ingredients as well, so when the summer rolls around, and farms are producing delicious berries and stone fruits, we’ve got access to all kinds of great fruits. And so we try to take advantage of that in the summers. As far as the flavours, themselves, go, and we do monthly specials, we kind of leave that up to the staff now. And that’s where, like, the new flavour suggestions come from.

So every month, the staff are the ones that are creating the new flavours for us, which is great because it kind of breaks up the monotony of the same flavours all the time.

Cartems comes out with new innovative flavours quite frequently. What’s the process of that like?

[Jordan]: Originally it was myself and the rest of the team that were coming up with the flavours, but now everybody’s got great ideas. So now it’s just a matter of flushing out those ideas and coming up with new stuff every month.

It’s fun because we get to taste all of those before the month comes up and give our feedback, and so it’s interesting.

Oh, man. We’ve done everything under the sun. I remember one Thanksgiving, we put turkey inside of a donut. Yeah, and we had, like, a gravy glaze, and there was also cranberry in with the turkey. So we made like a Thanksgiving donut one year.

We’ve definitely pushed the envelope over the years.

What is your favourite donut?

[Jordan]: So my favourite all time, and I don’t know if it will ever change, is the apple fritter. I really love our apple fritter, and I’m kind of picky when it comes to fritters ’cause it’s a very particular type of donut.

And if it’s done properly, you should be making it by hand. It should have a little bit of a crispy texture on the outside, and then it should be a lot softer in the middle. You should be using fresh apples, and you kind of roll the dough and then chop it up, and you form it by hand. That’s how a proper fritter should be made, and we do all of those things. And we save a little bit of the dough from the day before which adds a little bit more of the yeasty flavor to it. And we do all those things, so it’s hands down my favorite donut.

I have yet to have a better apple fritter than ours. I’m a little bit biased, but that’s how I feel

What kind of experience do you want customers to feel when they come to Cartems?

[Jordan]: The feeling that I want or I hope that customers feel is our whole intention here is we’re trying to uplift people’s days. That’s the whole goal.

You know when you’re walking down the street and you’ve got your head up, and somebody walking towards you has their head up, and you both say hello to each other, even though you don’t know that person? Your next few steps are gonna be better steps. You’re gonna feel a little bit lighter in your feet, and you’re going to have a little bit of a smile on your face. That’s the intention when people come in.

We’re really just trying to make their days a little bit better. And we do that with conversation when they come in. We try to get them to smile when they … genuinely take care in how they’re doing. And then obviously we want them to have a smile on their face when they eat the donuts, right? And that’s a part of the whole experience. But the overarching goal, really, is try and make people’s days better.

And the donut is kind of the conduit.

It’s the thing that we make, and we do the best we can every day with it, and that’s the thing that we … it’s the transaction that happens so that we can continue operating. We need to sell something that’s really important, and, obviously, I dreamt of donuts, so that’s what we do here.

But the overarching goal really is to try to make people’s days better.

Add a header to begin generating the table of contents