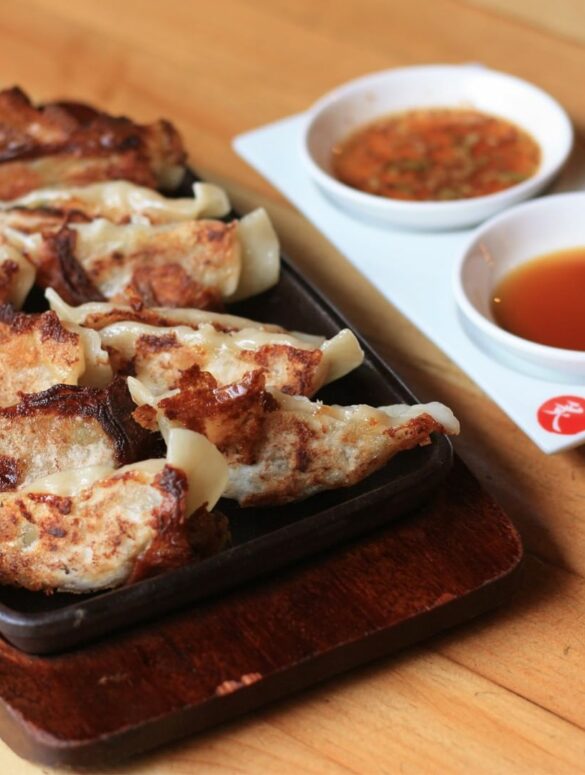 Where To Get 6 Different Varieties of Dumplings in Vancouver

Dumplings shine in cultures and cuisines all around the globe from Ukraine China and beyond. They can be big, small, filled or unfilled, sweet, savoury, spicy, or sour – the options are limitless. From xiaolongbao (soup dumplings) to mantu (a meat-stuffed afghan dumpling), many countries has adopted their own delicious styles of making dumplings.

As a proudly multicultural and diverse city, Vancouverites are lucky have access to so many cultural cuisines.

Here are several Vancouver restaurants you can visit to discover the different varieties of dumplings from around the globe:

Some say that the perogi originates from China, and others say that by the Tatars to the west from the former Russian empire, and still others claim that it was brought to Poland by Saint Hyacinth of Poland. Although there’s debate on where they actually come from, we can agree on one thing – that they’re delicious and satisfying.

Perogies are savoury or sweet filled dumplings that are popular in Central European countries like Ukraine and Poland. Traditional fillings include warm and satisfying stuffing of sauerkraut, potato, cheese, and sometimes even fruits. Due to their heavier filling of potato and cheese, these dumplings are certainly “filling”!

Perogies are definitely one to hit on a hungry day.

Where to Find them: Ukrainian Village

The Ukrainian Village along Downtown Vancouver’s Denman street offers a taste of this comforting European dish only a short walk from the scenic Stanley Park. The restaurant exudes a humble, homely feel with its simple blue awning, uncomplicated furniture, and colourful plates.

Ukrainian Village offers multiple types of perogies on their menu – potato & friend onion, potato and cheddar cheese, and sauerkraut, and are all served with sour cream.

Looking for the full Ukrainian experience? This restaurant also offers a “Ukrainian Dinner” meal which includes their popular cabbage rolls, Ukrainian sausage, and of course, perogies. So, what are you waiting for? Perogies await!

Manti, or Mantu, are dumplings that are boiled or steamed and filled with spiced meat. Their size and shape are as varied as the locations that they traditionally come from.  In Central Asia, they are larger, and in Armenia and Turkey, they tend to be smaller. In Afghan cuisine, mantu are steamed and filled with beef or lamb and topped with yogurt and sometimes a tomato-based sauce.

Where to Find them: Afghan Kitchen

You can get a taste of Mantu at Afghan Kitchen in Surrey. Their rendition is a steamed dumpling in a thin wrapper, stuffed with minced beef and topped with split peas, tomato sauce, and yogurt.

This restaurant takes pride in sharing an authentic taste of Afghan cuisine, where every dish is “mum’s recipe”. It was nominated for Best New Business by the Surrey Board of Trade in 2018. Their dishes are bright and colourful and definitely worth a try if you’re hungry for Afghan cuisine.

Ravioli. Need we say more? Probably not, but for clarification, this dish is a type of dumpling made with thin pasta dough that comes from Italy. Its first mentions were recorded in the writings of Francesco di Marco who lived in Venice in the 14th century, and we’re still chowing down on these pockets of deliciousness in the 21st century.

Where to Find them: Mangia Cucina

Mangia Cucina, located on Manitoba Street is proud to be a part of the dumpling community, as they were part of this year’s Vancouver Foodster Dumpling Fest. The restaurant’s unique location is inside a small converted heritage house in Mount Pleasant.

You may be surprised to learn that samosas are recognized as a form of dumpling! These spicy fried triangles of dough are typically filled with minced meat, vegetables such as potatoes and onions, lentils, and spices.

Where to Find them: All India Sweets

All India Sweets on Main Street was dubbed the “best” samosa in Vancouver by Vancouver Magazine in 2017. Their samosa flavours include chicken and vegetable. Aside from samosas, All India also offers a variety of dishes from Indian Cuisine, such as butter chicken and pakoras.

What’s a rundown on dumplings without the inclusion of xiaolongbao, or soup dumplings? This delectable Chinese steamed bun comes from the Jiangnan region. These are small steamed dumplings in a thin wrapper that are filled with hot soup and usually a meat of some kind. Traditionally, they are prepared in steaming bamboo baskets. Even though they are technically a bao because of how they’re prepared, they are often regarded as dumplings.

Where to Find them: Dinesty Dumpling House

The downtown Robson location features a street window view of live dumpling making action. They offer a multitude of xiaolongbao flavours, such as kimchi and pork, shrimp, scallop and pork, and steamed luffa and shrimp. Dinesty’s soup dumplings are such a popular dish that they even offer a Dumpling Points card:

What better excuse to keep going back for more? This restaurant can get busy, so make sure you get there  with some time (and stomach room) to spare!

Gyoza is a meat-filled dumpling that comes from Japan. It can be pan-fried (yaki-gyoza), boiled (sui-gyoza), or deep-fried (age-gyoza). It’s almost identical to its Chinese inspiration, jiaozi (also known as potstickers), but it has few subtle and delicious differences.

For example, Japanese gyoza typically has a thinner wrapper, as most Japanese restaurants use machine-made wrappers. They also tend to have a more pronounced garlic flavour and are served with a soy-based dipping sauce.

They’re usually served more as a side dish than a main dish in Japan. Most restaurants opt to serve pan-fried gyoza, with a delectably crispy bottom.

Where to Find them: Gyoza Bar

Gyoza Bar’s out-of-the-box creations take traditional gyoza to the next level. This restaurant on Downtown Vancouver’s Pender Street serves up Japanese comfort food with an international twist. They offer ramen, Korean bulgolgi, Bao sandwiches, and of course, their namesake, gyoza.

Their gyoza is served on a traditional Japanese imono cast iron pan, which maintains a perfectly crispy exterior while keeping a the filling juicy.

The humble dumpling connects numerous cuisines and they’re so delicious that it’s a pity not to try them all. The next time you want to try a comfort food out of your comfort zone, head for one of these diverse dumpling spots!

Dumplings shine in cultures and cuisines all around the globe from Ukraine China and beyond. They can be big, small, filled or unfilled, sweet, savoury, spicy, or sour - the options are limitless. Here are several Vancouver restaurants you can visit to discover the different varieties of dumplings from around the globe.

8 Best Hikes in Vancouver For A Great View and Workout

14 TikTok-Inspired Cooking Gadgets You Can Find on Amazon Today